Paul Lucas spent four years interviewing transsexual people from across the world as research for Trans Scripts. And the play he wrote focuses on six characters from varying backgrounds, with one thing in common: they all identify as transgender (male to female). Each interwoven and very personal story leads the audience through familiar heartbreaking tales associated with gender reassignment. Yet it is the women's subtly, and sometimes sublimely, different experiences that leave a lasting impression.

The knowledge that this play is based on real lives is partly what makes it so powerful; each time I hear a new element of a character's story, a sinking feeling hits my stomach, as I remember that this is not just a piece of fiction. The pain and suffering that transsexuals have been through – and still go through – is around us every day. That feeling stays with me throughout the whole play, not just because I know it is real, but also because the actors breathe life and love into these characters.

The setting features a room divider as a backdrop, decorated with different images of women. The effect is homely; it's like we are guests in the characters' own space. Each of the six actors is on stage throughout the ninety minutes, and when not speaking, they sit and listen to each other’s stories – often reacting to what they hear. The numerous focal points on stage help the audience understand more fully the different feelings the characters have on gender reassignment.

But the play is, thankfully, not just a wholly-depressing wallow in the internal and external turmoil that transsexual people face. There are some quite beautiful moments too – especially when we hear stories of the undivided support, either from the women’s loved ones or from their community. For example, the wonderfully likeable Carolyn M. Smith delivers a formidably uplifting speech towards the end of the play, which helps us remember that for all the people that hate the transsexual community – or indeed any person perceived as ‘different’ – there are also a good number of people who embrace difference, and will speak up and act out on behalf of them.

That is not to say that this is a perfect production. On two occasions, the fourth wall is broken – a device which feels out of place, and especially uncomfortable when the majority of the play casts the audience as a third party observer. But stand-out performances from Carolyn M, Smith, Bianca Leigh and Jay Knowles ensure that this is a show you will not forget quickly.

This review of a show at the Edinburgh Fringe 2015 was published on Friday 14 August. 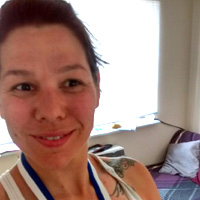