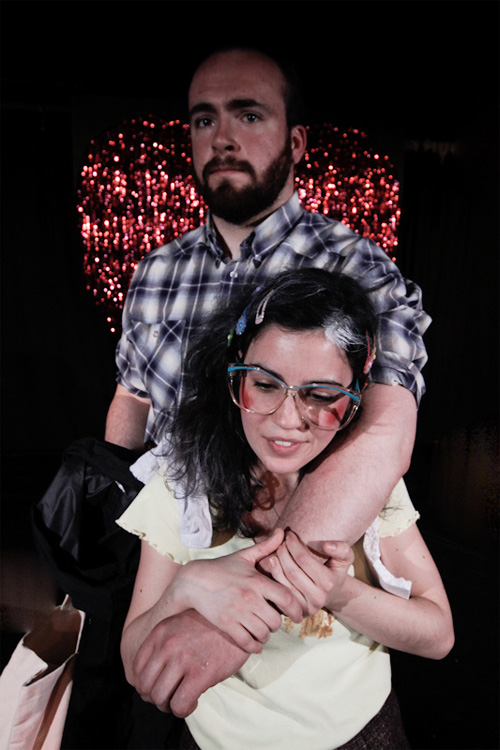 Adapted from a short story by American author George Saunders, Winky is a cleverly-constructed play, formed from two contrasting halves.  It starts on a light-hearted note, with a self-improvement seminar hosted by the toe-curling “visionary” Tom Rodgers.  At first, Rodgers seems a well-observed figure of fun, filled with false charisma and nonsensical metaphors.  But he has a darker side as well – revealed with sudden and shocking candour – and before long, you’ll find yourself confronting the uncomfortable question of what you do when your own fulfilment comes at the cost of someone else’s.

Juxtaposed with Rodgers’ brashness is the shy, diffident Neil, played with understated heart by an impressive Joe Boylan.  A client at Rodgers’ seminar, Neil is seeking escape from a mundane and disappointing life – and from something else as well, a dilemma which is delicately disclosed as the play develops.  Neil’s the definitive anti-hero, the kind of put-upon nobody we all fear becoming, and his journey through Rodgers’ programme offers moments of both crushing despondency and invigorating hope.

The true star, though, is the titular Winky: a character who’s harder to identify with, yet just as easy to love.  In the second half of the play, as she waits at home for Neil, Winky flits from room to room as her thoughts skip from topic to topic – revealing both a burning religious conviction, and some sad truths about her past.  Like quite a lot of the play, Winky’s scatty monologue is hard work for the audience.  But, again like a lot of the play, it rewards your efforts if you take the trouble to tune in.

The whole production is slickly-choreographed, but the pace is uncomfortably slow at times.  And while the simple set and bold direction deliver some striking images, there’s a slight suspicion that they’re compensating for an underweight plot.  If the truth be told, I’m not quite sure why Fat Git Theatre chose to adapt this particular story: it’s touching and realistic, but I didn’t find it challenging any of my beliefs or revealing anything especially new.

But it does reinforce some important truths – and it’s refreshing to see a script that makes it clear from early on that there won’t be an unambiguously upbeat conclusion.  The final mention, though, has to go to narrator Lauren Stone, who spends the whole time sitting slumped behind an office desk in the corner of the stage.  Her mechanically cynical observations are a comic delight – and the perfect match for the world-weary inevitability which defines this unusual play.

This review of a show at the Edinburgh Fringe 2014 was published on Monday 4 August.